16 March 2021 – With the anniversary of the first lockdown (23 March 2020) approaching, figures from the Licensed Trade Charity released today (16 March 2021) show that the number of people in need of its support more than trebled during 2020 compared to the previous year (218% increase). 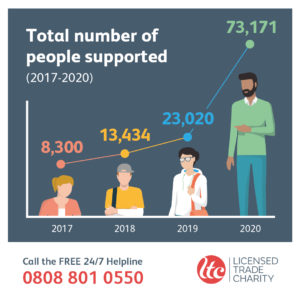 The sector, which employs an estimated 894,817 people in pubs and breweries alone (source: Oxford Economics/BBPA 2018), has been disproportionately impacted by the pandemic, and the toll on those working in the sector has been severe, both financially and emotionally.

The Charity’s free helpline reported a 127% increase in calls last year, with a shocking 41% of callers telephoning for mental health support. Many needed someone to talk to in a moment of crisis, while others required more in-depth face to face, virtual or telephone counselling sessions.

Unsurprisingly finances were another area that saw a sharp increase in demand, with the Charity nearly doubling the amount of money awarded to help people get back on their feet.  The charity services team, which supports those applying for grants, noted that a high number of applicants have turned to gambling during lockdown. 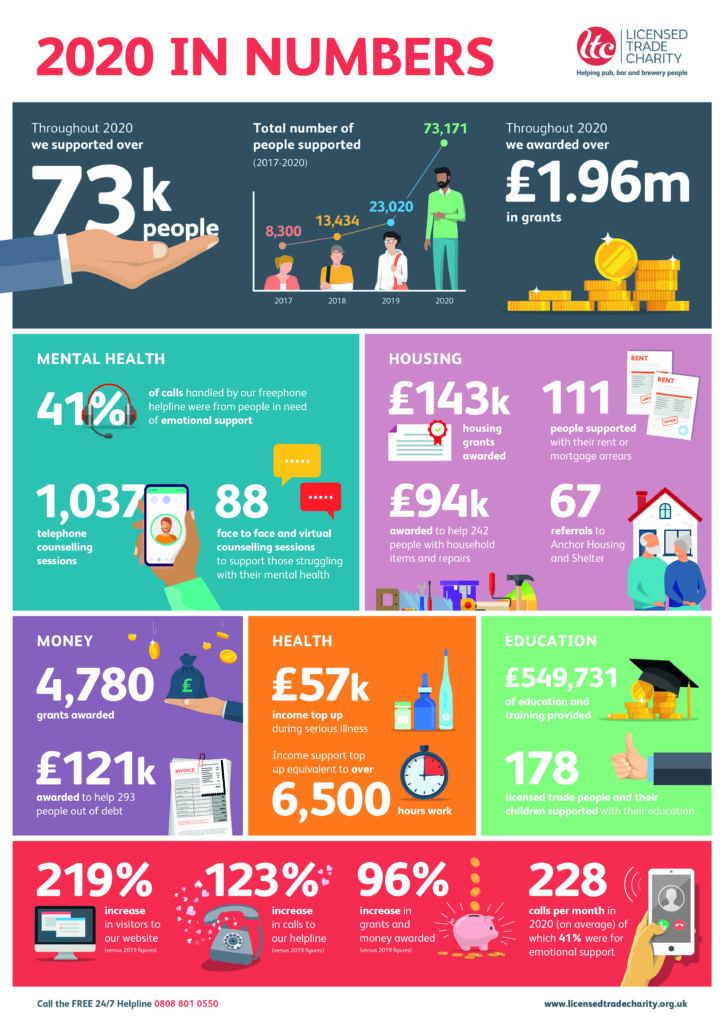 The Charity has expanded its services in line with demand and today offers a range of practical and emotional support in areas such as finance, housing, health, education and training, including outplacement assistance. Most services are free to anyone who has worked in the licensed trade industry, irrespective of length of service, but there is a minimum qualifying period of five years for the Charity’s financial support.

In recent years, a growing number of pub companies have partnered with the Charity to offer its services to their employees, and last year the organisation took on the distribution of ringfenced grants on behalf of five pub companies, to support their people during lockdown.

The devastating impact of the coronavirus on the hospitality sector continues, with doors to pubs, bars, restaurants and nightclubs in England still firmly shut until 12 April at the earliest. Many premises, particularly ‘wet led’ pubs, have been closed for over year, unable to open during the brief easing of lockdown, due to social distancing regulations and Britain has seen a net decline of 7,724 licensed premises in the 13 months to end January. Of those 1,749 permanently closed during the first month of 2021 (source: CGA AlixPartners).

Commenting on the Charity’s figures, Carolyn Jenkinson, head of charity services at the Licensed Trade Charity, said; “The increase in demand for our services is testament to the impact of the pandemic on those working in the hospitality industry.

“The financial impact of lockdown has also been crippling, especially for anyone who already had multiple debts, or those with live in roles, who have lost not just their jobs, but the roof over their heads.”

Licensed Trade Charity, CEO, Jim Brewster added, “The Charity has a long heritage of supporting licensed trade people, but the demand that we’ve seen in the last 12 months has been unprecedented. Our small but agile team has been able to adapt and flex our range of support and I am proud that we have been able to help so many people through this pandemic.”

To find out more about the Licensed Trade Charity, its services, or to donate, visit www.licensedtradecharity.org.uk or call freephone 0808 801 0550.