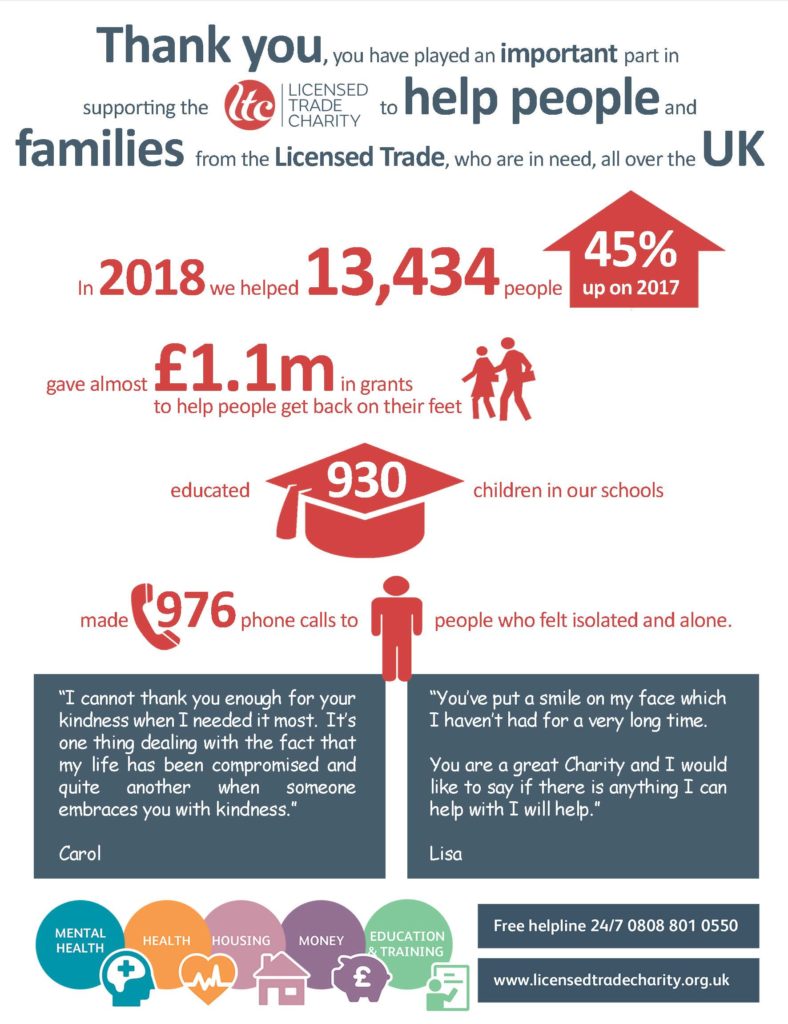 Staff from pubs, bars and breweries received a record amount of £1.1m in grants from the Licensed Trade Charity in 2018, helping them to get back on their feet in a range of ways from clearing rent arrears and unpaid bills to home adaptations, educational grants and even convalescence and funeral costs.

The charity, which provides help to anyone who works in, or has worked in, the licensed trade, also revealed that almost 13,500 people benefited from its services in 2018, up by 45% on 2017. Many of those taking advantage of the assistance the charity provides used its free 24/7 helpline, staffed by trained advisors, and website with a range of advice including over 50 help sheets on subjects such as mental health, money, housing, education and health.

The charity thanked pubcos for helping it to increase awareness amongst their staff, such as JD Wetherspoon, Ei Group, Stonegate and Fuller’s who are working with the charity to promote its services. The support offered by the Licensed Trade Charity is similar to that provided by an EAP (Employee Assistance Programme), but with one significant difference – it is provided free of charge. One major pub company has even dispensed with its EAP provider to promote the charity’s assistance instead.

“It is fantastic that we are able to offer our employees a free helpline that is provided by the Licensed Trade Charity to support them in a wide range of challenges that they may face in their daily lives. This directly replaced a fee paying EAP service but there are many other benefits to the LTC service, the most important being that they understand the work and lifestyle of our teams due to their experience working with people who have built careers in the licensed trade.”

The Licensed Trade Charity also revealed that in the last calendar year its volunteers made 976 phone calls to former trade workers who feel isolated and alone, whilst over 800 pupils enjoyed an education at the charity’s independent school LVS Ascot, where bursaries and scholarships are available to the children of those in the trade.